You are here: Home / About us / Locations

Cairns is the heart of Tropical Australia, and yet has good air links with the Cairns International and Domestic Airports only a 5 minute journey from the city centre.

Cairns is also the gateway to the many nearby towns and villages and as such provides an ideal base to begin exploring the rich and varied pleasures of this region. Stay a few days to discover the many delights before venturing further afield. The Cairns Esplanade is a major focal point of the city, and invites you to stroll along the foreshore, fly a kite, relax on the grass under a shady tree, eat at its many alfresco eateries or simply share a barbecue or picnic with friends. It is actually a big misconception that Cairns is a beachside town, it actually lies next to tidal mudflats which at any time of the year, you’ll see the flocks of different birds which migrate annually from around the world to feed on the mudflats, much to the delight of the world’s birdwatchers who pack cameras and binoculars and follow them here.

Having said this, the local government constructed a manmade beach at one end of the mudflats. This includes a swimming pool complete with white sand.

City shops and duty free stores are well stocked with souvenirs and luxury goods from top Australian and overseas designers. There are two large leisure retail centres, one at the Pier at the end of the Esplanade and another at Cairns Central, part of the main railway station. Both have a great deal to offer visiting shoppers. There are also large shopping centres in the suburbs, Smithfield, Earlville and Westcourt. The city center also has many interesting arcades, plazas and malls, interconnecting the streets. The city center also boasts a Regional Art Gallery which has permanent and special exhibitions. There are also many private galleries who sell original works by resident artists.

On the city’s northern fringe, within walking distance of each other, are the Tanks Art Centre and the century-old Botanic Gardens which include spectacular walks through the Mt Whitfield rainforest and relaxing Centenary Lakes. A free city bus can take you here to explore.

The most popular thing for locals and visitors to do is to sit on the esplanade, sip a latté and people watch. The colourful and diverse characters, the groups of visitors from every corner of the world all simply enjoying the passing parade, you really never know who you may bump into! Please be warned that although the city center is safe and well lit, and no matter how tempting it may be to stroll back the 20 minutes or so to your accommodation, catch a taxi instead. Although not bad by many cities’ standards, there have been a few incidents, and most of these at night.

Fitzroy Island is one of 600 Continental or High islands on the Great Barrier Reef. It is located on the Inner Barrier of the Central Region of the Great Barrier Reef, and is part of the Great Barrier Reef World Heritage Area. The reef surrounding Fitzroy is known as a Fringing Reef. Fitzroy was once part of the mainland so the rocks are the same as on the mainland (granite). It is actually part of the coastal mountain range of Malbon Thompson Mountain Range that’s located behind Cairns (including Bellenden Ker, Mount Bartle Frere and Walshe’s Pyramid). The Island was connected to the mainland about 10,000 years ago but when the Ice Age ended (about 8000 years ago), the ice caps melted and the ocean rose an estimated 100m, flooding the valley between Fitzroy and the other mountain peaks. This left it as an isolated island. You will visit an island that is actually the top of a submerged mountain. Most of the island’s water comes from a natural freshwater spring originating in the Tablelands near Mareeba, and surfacing in the National Park bush behind the main complex. Fitzroy Island is located approx. 35 kilometres (18 nautical miles) south east of Cairns. 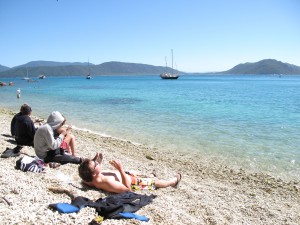 The Beach at Fitzroy Island

Tropical North Queensland is a vast region stretching from reefs and islands, through to beach and coastal wetlands to mountains, tablelands and Gulf Savannah grassland. The major centre is Cairns, a tropical town with irresistible markets and shopping arcades.
To the north of Cairns are the Northern Beaches comprising Palm Cove, Trinity Beach, Kewarra Beach and Ellis Beach where palm trees hang lazily over the sandy beaches. Further north is the resort town of Port Douglas and continuing on you find the spectacular Mossman Gorge, World Heritage listed Daintree Rainforest and Cape Tribulation.

Adrenaline junkies will be spoilt for choice in the Cairns area with Bungy jumping above the rainforest canopy at AJ Hackett’s purpose built Smithfield facility, while to the south of Cairns there is Skydiving over the Great Barrier Reef at Mission Beach and white water rafting on the Tully river.

The world’s largest reptile, the saltwater crocodile has a healthy population along the coastline of northern Australia, and around Cairns these magnificent animals can be seen both in captivity and the wild. Male saltwater crocodiles grow to be over 5 metres in length. Luckily they are not routinely encountered on dives (at least no-one has come back and told us they encountered one…).

The Australian rainforests around Cairns are the oldest in the world and boast many unique species including the Lumholtz Tree Kangaroo which has given up its ground-dwelling lifestyle and has become highly adapted to climbing and living high in the rainforest canopy.

Cassowaries are regularly seen in the area. These giant flightless birds are the third largest in the world, only smaller than the ostrich and emu and show gender role-reversal with the fathers incubating the eggs and then raising the chicks.

North of Cape Tribulation is the area Cape York and the Gulf Savannah renowned for its rugged coastline and wild and sparsely populated wilderness.

West of Cairns is Kuranda and the beautiful Atherton Tablelands and travelling further west you come to the Gulf Savannah with its rich history of gold rushes, bushrangers and wandering Aboriginal tribes.
South of Cairns is the Cassowary Coast including Mission Beach, and to the east off Cairns are the magnificent Green, Lizard and Fitzroy Islands.

Promoters of Queensland have a saying and that is “Queensland, beautiful one day, perfect the next”. To a degree this is true, however try telling that to the family that just spent $3000 for their slice of perfect and only scored continuous rain and constant comments of “oh, you should have been here last week!”

Tropical North Queensland is blessed with beautiful warm weather, but sometimes it can be hotter (and/or wetter) than you feel comfortable with, and for some even mid-winter may not be as warm as expected. Here’s a tip – the time of the year when all the accommodation houses, reef operators and tourism bodies take those beautiful promotional photos that sell Tropical North Queensland is September, October and November.

OK, the tropics are paradise, but there is a downside during summer – cyclones. 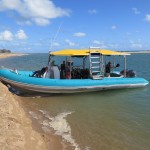